If you’re not a soccer fan, you might have missed it. Last Thursday, June 12th, nearly everyone on the planet had their eyes turned toward Brazil and the opening of the World Cup. It is truly a universal event with teams working for years to qualify for each of the six global zones.

This awesome McDonald’s World Cup commercial highlights people’s skill from all over the planet and pretty much makes you feel the warm fuzzies.

Want to follow the action with the rest of the planet but don’t really get what’s going on?

I’m here to give you the basics in two paragraphs or less.

Out of the entire soccer world, 32 teams made it to the actual competition. They are placed in 8 groups for the first part of the competition – in a way guaranteed to strain your brain but aiming to spread out the teams by ability and region. The top “seeded” (translate highest ranked) team names are put into Pot 1. The rest of the teams are put into 3 more pots by region.  Then they choose one team from each pot to fill out the groups. Careful who you ask about this, you could get an earful from a fan! FIFA, the international soccer governing body, developed a complicated system to equalize the pots. I’ll do you a favor and skip it!

These are the groups:

Over the next two weeks, these teams all play each other. They earn 3 points for winning and 2 points for ties. The two teams with the most points in each group move on to the next part of the competition. There, the winners from one group play the runner-up from another group. You lose, you’re out. The teams continue to play each other until the final two compete for first place on July 13th. The next two teams compete for third place.

If you feel like playing along, you can create your own brackets with ESPN’s Bracket Predictor.

Let’s fire you up with the official World Cup song!

Although many people prefer this song by Shakira.

In the end, these memes’ commentaries on the official World Cup logo might sum up your feelings! 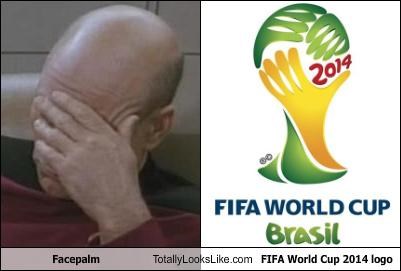